Around NEWS 10th Birthday in September a Russian fan community, I'm in, was thinking how to celebrate & came to a thought that usual anniversary posts & stuff, like just writing greetings inside our group, are useless, and that if we really want to congratulate NEWS on 10ve Anniversary we should do something that will reach for them directly. And so, we decided to write them a letter.

A whole week before Sep 15 we collected short messages from all fans who wanted to take part, then translated them into Japanese with rather big or small help of some really nice people, aaaand sent.

We used 3 different mail addresses to send our letter, containing 21 messages in total, to all 4 NEWS radio shows. xD
We risked being considered mad, but in the end it led us to success! Last Friday, Oct 4, Massu read our mail during MASTERHITS! =D He read the intro and two random messages: MINE (=D) & another girl's one. Was amazed there're so many NEWS fans in Russia & wished for a concert one day. So do we! :D

Thank you, Masuda-san! Thanks everyone who participated, more or less, visible & hidden! 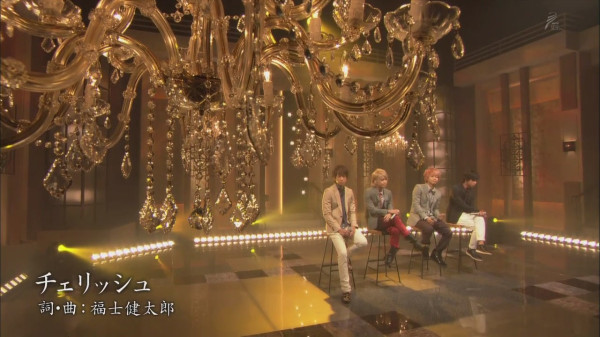 Songs recommended by Shige in his radio show SORASHIGE BOOK.

During a scene of ep.5 of "Hanawake" with Takemi & detective Shibata, played by Mikami Kensei who also played Duke aka Deku in "Deka Wanko" there was "Taiyou ni hoero!" aka "Deka Wanko Theme" playing as BGM?
:D Cute connection, ne~

Finally! My early-access mail have just arrived. Yatta! The site looks like a quest game. My favorite type. I'm now looking forward to explore its deeps.

Btw, my username is: FlooVine115. Let's be friends on Pottermore, too.

Valentine special collaboration between Tegomass & HOME MADE Kazoku at February Music Fair.
I fall in love with this perfomance! And ripped it into mp3.

"Koi no Wana Shikakemasho ~FUNK THE PEANUTS no Theme~" was originally sung by charming female duo FUNK THE PEANUTS in 1995.  If you're interested you can download the original (though quality is poor):

Lyrics (kanji) can be found here.
Cross-posted in news_jpop.
Enjoy ♥

I've never written a diary in my whole life. ^^" Have no idea what to do here, but probably I'll be posting smth from time to time.